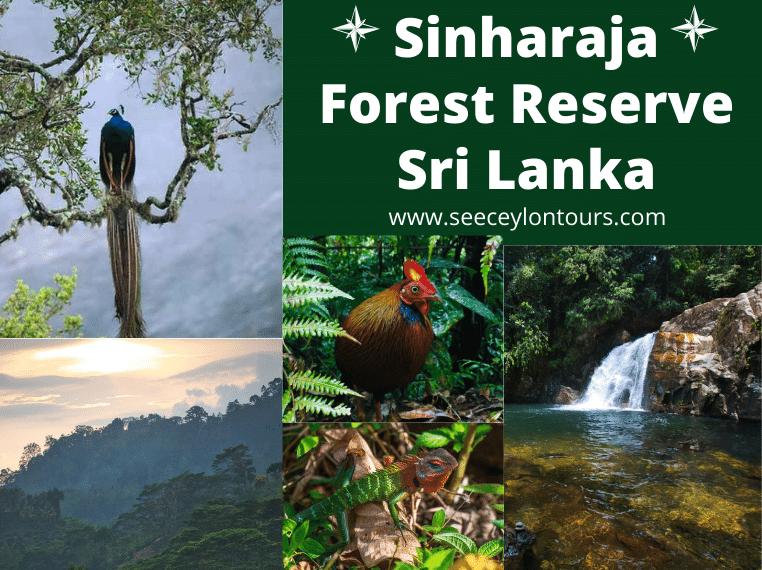 Designating as a Biosphere Reserve and World Heritage Site by UNESCO Sinharaja forest reserve is a biodiversity hotspot in Sri Lanka. It is the country’s last viable operation of primary tropical rainforest. Covering an area of 11,000 Ha of primary and secondary woodlands, this narrow strip of rolling site encompasses a range of hills and valleys. Surrounding by the impenetrable fog, the deadly, dark and enigmatic Sinharaja rain forest steeping in deep legend and mystery.

The word Sinharaja means lion (king or kingdom), and a famous folk legend has it that a legendary lion dwelt in this protected woodland. Sinharaja Forest Reserve encompasses most of the Kalu Ganga basin and a minor portion of the northern Gin Ganga. The majority of the Forest, 60%, falls within the Rathnapura district boundaries. Other districts comprise 20% of the total, including Galle and Kaluthara.

Sinharaja rain forest most likely originated between 200 million and 145 million years ago, during the Jurassic period. It covers 36,000 hectares (88,960 acres/360 km2) of land. Although the reserve spans only 21 kilometres east to west and a maximum of 7 kilometres north to south, it is home to an abundance of endemic species, including plants, insects, amphibians, reptiles, birds, and mammals. Sinharaja rain forest vegetation density is approximately 240,000 plants per hectare, making it Asia’s most dense rain forest.

Why Is Sinharaja Forest Important?

According to IUCN, also known as the International Union for Conservation of Nature, the Sinharaja forest reserve has more than 60% endemic trees. Many of them deem rare. There are much endemic fauna, notably birds. It is home to 95% endemic birds. Still, it also has almost half of Sri Lanka’s endemic animals and butterflies and a variety of insects, reptiles, and uncommon amphibians.

Sinharaja forest reserve is a major eco-tourism destination in Sri Lanka. It is a world heritage and is one of the few virgin woodlands left in the world. There is also an affluent reptile population and myriads of insects’ species, many yet to be classified. It is also home to the temporary leopard.

It is one of the primary reasons why UNESCO designated and, then known as Sinharaja Forest Reserve, being a UNESCO World Heritage Site in 1988. It was first recognized in 1936 as the island’s only significant natural tropical rainforest tract. In 1978 it was accepted by UNESCO as a biosphere reserve. Recognizing the importance of utmost protection, the site is on the verge of being designated as a National Heritage Wilderness Area.

Being a haven for threatened and endangered species as well as a fantastic site for research into the process of biological evolution. Sinharaja Forest reserve is the most excellent area to see mixed-species bird flocks. This rainforest is a safe abode for more than 147 avian species.

There are frequent sightings of badger mongooses, giant squirrels, torque macaque, and the endemic purple-faced leaf monkey and dusky-stripped jungle squirrels. It is home to numerous vulnerable mammals, reptiles, amphibians, and butterflies, including the leopard. Mammalian and butterfly endemism is more significant than 50%. The endemic hump nosed lizard (Lyriocephalus scutatus), endemic green pit viper, python, and rough-nosed horned lizard are all reptiles and amphibians (Ceratophora aspera).

Due to the high species diversity, it is not easy to discern ecological patterns. The genetic potential of flora is vast. Of the 211 woody trees and lianas observed within the sanctuary, 139 (66%) are indigenous. Thirteen of the 25 endemic genera to Sri Lanka are present here. The overall biomass density, which comprises trees, shrubs, herbs, and seedlings, is estimated to be around 240,000 individuals per hectare, with 95% of those in the ground layer being under 1 meter tall.

Sinharaja forest reserve climate yearly average temperature is approximately 23. 6°C. It receives more than 2500mm of rainfall annually and contains 38 isohyets ranging from 10 to 5080mm. The rain evenly distributes throughout the year, with peak periods occurring during the two monsoon seasons of May–July and October–December. Throughout the year, there is no dry spell.

Sinharaja Forest Reserve is located in the Sabaragamuwa and Southern Provinces of Sri Lanka. This lovely wet rainforest covers approximately 21 kilometres east to west and about 7 kilometres north to south. It comprises a series of continuous ridges that run roughly east-west and locate between the tributaries of the Kalu Ganga in the North and the Gin Ganga in the south. Sinharaja Forest Reserve is accessible via four primary routes.

For visitors coming from Colombo, the Kalawana-Weddagala road is the shortest and most convenient. It is 82 kilometres from Galle or Koggala International Airport. You can rent a cab or a private vehicle to get there in less than three hours. There are numerous vehicle options available at the airport.

Walking through wood is the best way to enjoy the jungle in all its glory. Deniyaya Mederipitiya in the east and Kudawa in the North are the best places to start your journey. Sinharaja Forest Reserve best time to visit is between January and May or August and December. You must avoid visiting any forest or natural reserve during the monsoon season.

This is when insects, bugs, and mosquitoes are at their peak, and diseases abound. Additionally, the location suffers significant rainfall, making sightseeing and exploration impractical. So, January to May and August to December are the greatest time to tour. The weather is good and offers a magnificent experience of seeing this vast area of natural wonder. Hiking and other forms of exploration are more enjoyable in the cooler, dry months of the year.

What to Do in Sinharaja Forest Reserve

Sinharaja Forest Reserve is the epitome of unadulterated nature. You will rarely come to such unknown and wild nature, let alone such an abundance of biodiversity. Numerous nature walk trips are available. Some orient toward water sources and waterfalls. While others orient toward the jungle, a few are oriented toward both. These guided tours provide an excellent learning experience for both children and adults. Several of the extraordinary nature walks include the following:

To enjoy a nature walk, choose the bird and butterfly observation route, which leads through pristine terrain and provides excellent bird and bug spotting opportunities. The trail separates into two sections. The first is approximately 2 kilometres long. It is ideal for all age groups, beginning near the Ecolodge and continuing up to Samangala. The second is approximately 1.5 kilometres long. It follows the same trail as the first. This location is excellent for viewing various exotic birds and Macaque monkeys.

After nightfall, night trails are guided tours that allow you to experience the various treasures of this vast expanse of wild nature. It is a unique experience that every nature lover should attempt. The most incredible method to discover Sinharaja Forest Reserve’s true character is to hike or trek along the numerous routes that have been created for this reason. These hiking routes range in length and can visit as part of several tours. It has approximately 16 hiking routes.

This track, which is around 8 kilometres long, passes through some of the most beautiful regions. The journey takes you to the highest point, Sinhagala. It is a challenging walk that needs both physical and mental stamina.

This 10-kilometre hike leads you past the Pathan River and the stunning Hathan waterfall. The walk begins at the Pitadeniya Conservation Centre and winds into the jungle. Remember that this trail requires some climbing to complete.

This trail is roughly 3 km long and covers managed areas in the Northwest. Despite the dense jungle, the path is simpler to walk than the Sinhagala tracks. This trail’s deep cover makes it ideal for bird observation.

This walk is around 10 kilometres in length and passes by the stunning Duvili Waterfall. Additionally, this journey passes by various caves. You may also come across sambar deer and water buffalo along this trail. Make sure you carry your camera and record the grandeur of the diversity of flora and animals. And most importantly, leave with various memories in the form of pictures.

It is the closest restaurant to Sinharaja Forest Reserve. The Lankagama Road restaurant is 0.1 km from the park. It also provides Asian, Chinese, and continental dishes.

This is not your average national park eatery. But it has its own restaurant. If you stay here, you can use their restaurant to feed your stomach.

Enjoy outstanding cuisine while visiting the Sinharaja Forest Reserve. This resort and restaurant locate in Kudawa, near the Sinharaja Rainforest.

Explore the deep woods of Sri Lanka. Walking under the majestic trees creates a natural canopy, allowing little sunlight into the woods, giving it a dark aspect. The green layer of soft grass and moss feels like a carpet placed just for you with its velvet-like surface. Sri Lanka has about 26 indigenous bird species. The UNESCO World Heritage Sinharaja Forest Reserve features around 20 indigenous bird species. The Forest’s various streams add to its attractiveness. The wonderful ambience adds the sound of sparkling water dropping on big rocks. After a trip or nature walk through the woodland, you will be surprised to encounter various insect species that are unique to the Sinharaja Rain Forest. Don’t miss the lovely flora. Make sure you accompany a guide who speaks fluent English and is knowledgeable about the animals and, surprisingly, the vegetation. They can name every plant and describe it in detail.