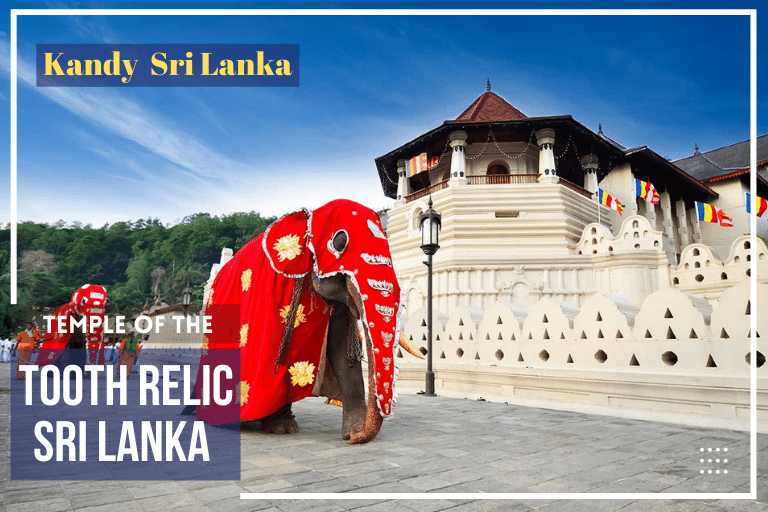 Located in the cultural capital of the island, Kandy, the Temple of the Tooth Relic, or ‘Sri Dalada Maligawa’ is the utmost place of veneration for all the Buddhists in the country. It houses the tooth relic of Gautama Buddha, which is one of the most worshipped and respected reliquaries in the religion of Buddhism, both within Sri Lanka and in the entire world.

To this day, the tooth relic of Gautama Buddha remains magnificently in a gilded casket adjourned by worshippers, flowers and many treasures inside an inner shrine in the Temple of the Tooth Relic. Temple of the Tooth Relic is beautifully built with Kandyan architectural elements, along with the architectural styles of ‘Dalada Mandira’, which housed the sacred tooth relic in the previous kingdoms.

It is a captivating palace with white walls and red roofs, with the interior of the temple walls elaborately carved and decorated with wood, ivory and stone while using bright, magnificent colours for the murals and paintings. 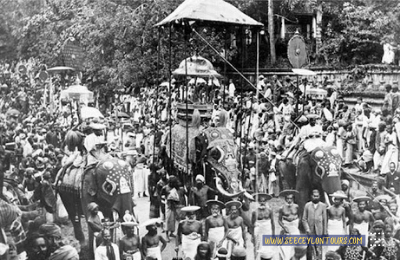 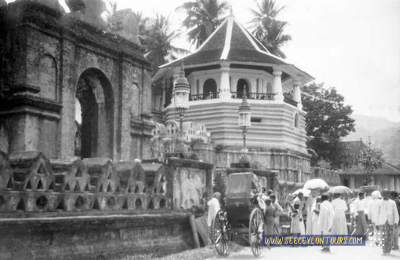 Temple Of The Tooth History

The story of how the Sacred tooth relic arrived in Sri Lanka is a beautifully told, historically significant incident. It was brought into the country by Kalinga king’s own children, Prince Danta and Princess Hemamali, with the tooth hidden in the princess’s hair. An ancient mural of the two Indian royals bringing the sacred tooth relic to Sri Lanka is one of the most famous and the most re-created historical arts in Sri Lanka.

The sacred tooth relic is the most venerated in the country, and it was believed that whoever had custody of it, would govern the country as king. Hence, all the Sri Lankan kings built shrines within their palaces for the tooth relic and when the capitals of the country moved due to invasions and other political propaganda, the tooth relic moved with them.

First, it was placed in the kingdom of Anuradhapura, then at Polonnaruwa, Rohana, Kotmale, Beligala, Dambadeniya, Yapahuwa, Kurunegala, Gampola, Jayawardenapura Kotte and Sitawaka respectively, then finally at the current Temple of the Tooth Relic in Kandy. The Temple of the Buddha Tooth Relic resides within the royal palace premises of the last Sri Lankan king.

Since Kandy was the final kingdom in Sri Lanka, many kings of the Kandyan era had made the palace their home and carried out rituals in the Temple of the Tooth Relic. The royal palace in Kandy was first built by King Wimaladharmasuriya in the late 1500s but is said to be destroyed during the Portuguese attacks. The kings who reigned afterward re-built the palace a couple of times, only to be destroyed later during foreign invasions and overtime as well.

The palace and the shrine which can be seen today was built by the last Sinhalese king, King Narendrasinghe, in the 1700s. The Temple of the Tooth Relic was renovated and brought to the present appearance by the Nayyakkar king, Keerthi Sri Rajasinghe. The famous ‘Pattirippuwa’ or the Octagonal Pavilion, which is the most prominent sector of the palace today, was built by the last Sri Lankan king, Sri Wickrama Rajasinghe, during his reign. 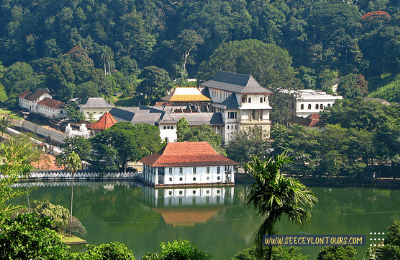 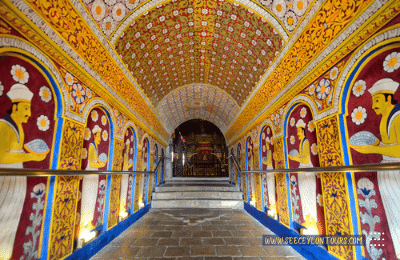 Folklore, Temple Of The Tooth Relic

The Temple of the Buddha Tooth Relic houses the relics of what is believed to be the actual tooth of Gautama Buddha, the pioneer of Buddhism in the world. It is said that Lord Buddha, addressing the request for something to worship him after his death by his personal attendant, Ananda Thero, advised some relics to be taken from his ashes to be delivered to Buddhist kingdoms of the world.

As a result, after the passing or ‘Pirinirvana’ and the cremation of Gautama Buddha, it is said that four canine teeth were retrieved from the ashes and regarded as the holiest relics of Buddhism from that day onwards. The four teeth relics ( Buddha Tooth Relic )were said to the distributed among four Buddhist kingdoms that sought them to worship them.

One is said to be taken to the world of Gods, another to the world of Nagas, another one to the kingdom of Gandhara (modern-day Pakistan) and the upper left canine tooth to the Kalinga kingdom in Eastern India. This final tooth is the relic that now rests in the Temple of Tooth Relic in Kandy among utmost veneration and respect. The sacred tooth relic has been said to be gone through many hardships in the kingdom of Kalinga in India.

It had become an object of utmost veneration and devoted worshipping, which later attracted fury and wrath from the followers of other religions. Many fanatical Kalinga rulers have tried to destroy the relic many times, but it has said to survive all the attacks miraculously. 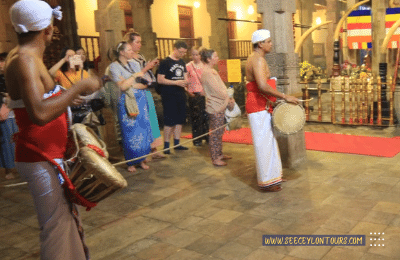 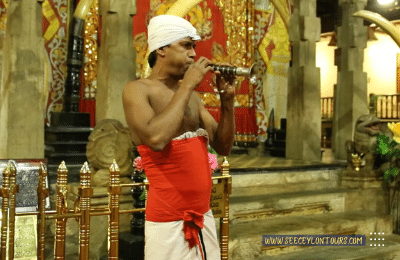 Since the sacred tooth relic is regarded as today as the living embodiment of Gautama Buddha, all the rituals carried out in ancient times by Lord Buddha’s personal attendant, are performed in the Temple of the Tooth Relic as well. There are three daily rituals, also known as ‘Theva’, a weekly ceremony and annual four festivals to honour and worship the sacred Buddha Tooth Relic.

Jasmine flowers and food items made from coconut milk, known as ‘Kiri Aahaara’ are offered to the tooth relic in silver and gold vessels. Only the monks who are specifically assigned to this task are able to touch them. The Middle Period of Service at the Temple of the Tooth Relic begins around 9.30 in the morning amidst the sound of the beating Magul Bera.

This represents the offering of daily meals to Lord Buddha, and is concluded in around an hour. Visitors and the general public are not allowed to witness this service and it is done by a monk dedicated only for that task. The Evening Period of Service starts around 6.30 in the evening each day, and again, amidst the sound of Magul Bera, old, withered flowers in the shrine are removed and fresh flowers are offered to the relic 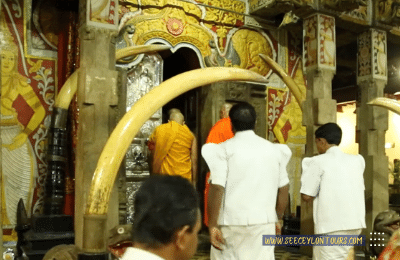 During this Evening Service, devotees can offer flowers in the shrine room as well. The weekly ceremony performed at the sacred Temple of the Tooth Relic is known as The Nanumura Ceremony. Since the casket that holds the sacred does not leave the shrine due to safety reasons, a small silver casket represents it.

Reigning from ancient times, four main annual ceremonies are conducted in praise of the Lord Buddha, which are centered around the Temple of the Tooth Relic, which are conducted as blessings for the nation. These festivals are the New Harvest Festival in January, the New Year Festival in April, the Esala Perahera in July and the Karthika Festival in November. 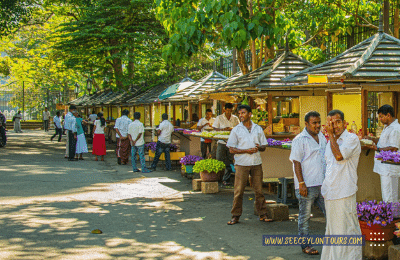 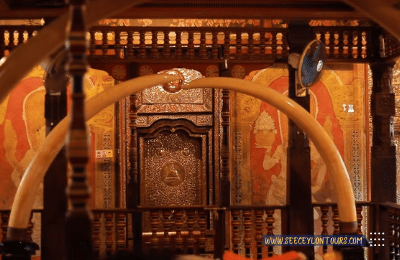 What You Can See At Temple Of The Tooth Relic

Since the Temple of the Tooth Relic is a large building complex with the royal palace as well as the Kandy lake in the near vicinity, there are many buildings, carvings, museums, pavilions and holy shrines to be seen.

Before Visiting | What To Wear? | Buddha Tooth Relic Opening Hours

Before you visit the most venerated and the most religious location in Sri Lanka for Buddhists, there are a few things you should keep in mind. The temple’s opening hours are from 5.30 in the morning and to 8.00 at night, and you should be aware that there is no such thing as a less-busy time when it comes to the Temple of the Tooth Relic. 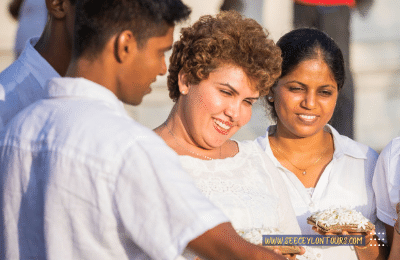 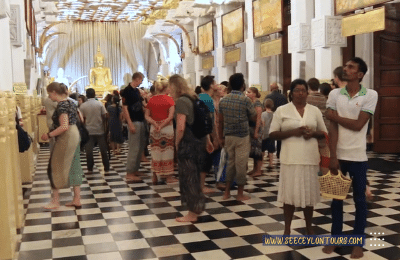 The Temple of the Tooth Relic compound is always packed with Buddhist devotees, pilgrims wearing white from head to toe and Buddhist monks from all over the world in their orange robes. So, unless you need to look like a pea out of the pod, we suggest wearing a light-coloured conservative outfit.

There are security personnel at the entrance to the compound, and if you are wearing provocative or revealing outfits, you won’t be allowed to enter. You can always buy a sarong or a long cloth from the many small shops in the area and wear it around you if that is the case.

You will have to leave your footwear outside the main entrance before entering, and there is a small hut where you can keep your footwear safely at a small fee. Upon visiting, you will probably be sought after by local guides, and do not hire them unless you are prepared to pay them at the end of your journey into the temple.

We always recommend buying a small guide leaflet or a booklet from the many information stalls if you are willing to make the visit on your own. When inside the Temple of the Tooth Relic, always remember you are in one of the holiest locations in the world for Buddhists and make sure that you respect it and the faith of the Buddhist devotees. We hope that this guide to the Temple of the Tooth Relic in Kandy is informative and can help you plan your visit to it with much ease. 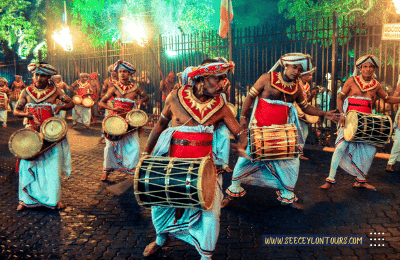 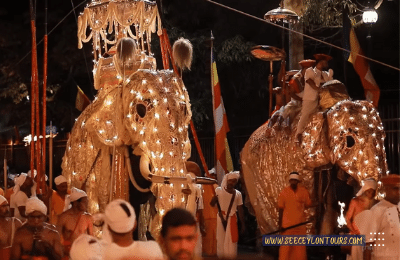 The Procession of the Sacred Tooth Relic, or the Kandy Esala Perahera, is the epitome of all Buddhist celebrations and it is one of the grandest cultural pageants in all of Asia. It is the event where the sacred Buddha Tooth Relic is brought out of its resting shrine at the Temple of the Tooth Relic and roamed the streets of Kandy on top of an ornately decorated elephant.

The ritual of the procession had begun in the 18th century and during the full moon in the month of July, a magnificent royal Sri Lankan elephant, leads the procession, carrying the casket of the sacred tooth relic. The procession consists of hundreds of elephants dressed in elaborately decorated finery, fire dancers, whip crackers, musicians, traditional dancers, traditional jugglers and members of noble families in traditional Kandyan outfits.

Due to the threats of the LTTE terrorists in the country who even bombed the Temple of the Tooth Relic, the sacred relic itself has not been brought out of the temple since 1990. However, the casket which houses the sacred relic is brought out into the procession and is honoured as it represents the relic. 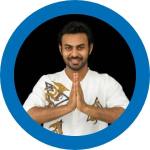