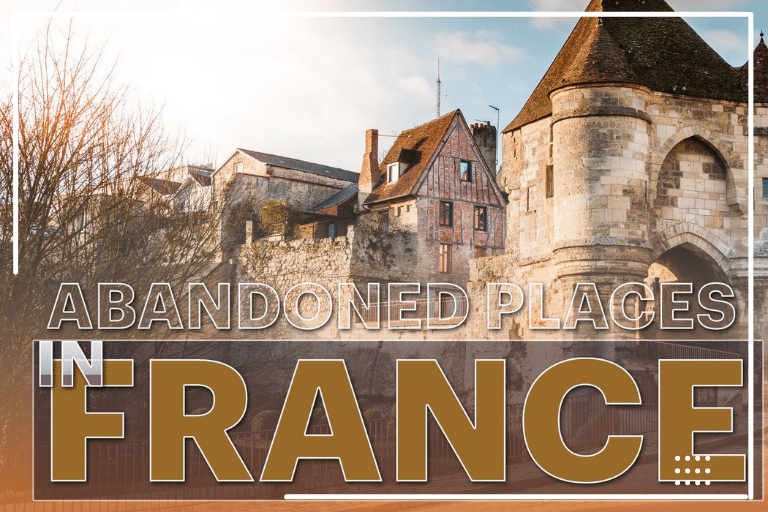 France is an awesome country for travelers along with 100 reasons to pay a visit. This article will explain about 07 abandoned places in France. France is considered to be one of the Noble States in the old world where the mansions and the massive structures were built.

One of the related things about those mansions is being abandoned at a time. They could attract the travelers even at present for various reasons raised by the travelers by themselves. Although t is about the horror mixed stories, the beauty of the ruins, or anything of your own, you are free to find your own reasons.

If you are interested in discovering some fruitful sites for your eyes’ sake, following 07 Sites will surely keep you embraced.

If you want to experience being abandoned in the time, the Domaine Des 3 Colonnes is one of the best places to see with your own eyes. The building has not only been found by the time but the tragic incidents in the early times. This place has a tragic past for two families throughout the history. When it comes to the first one, the incident has happened in 1857.

The first owners, Monsieur and Madame Tupin, had been found dead by the servants. It is said that both were killed by themselves in a dark night. When coming to the second incident, Weisweille had an origin of Jews who were assassinated by Nazis in 1940s. According to sources, the tragic history has not continued so far.

The mansion has become a property of the nature since 2008 when the last heir died. If you are interested in capturing some eye catching photos from the trip to France in an awesome place, this mansion near Angervilliers, will be a great one.

You won’t believe that the first place to pay a visit as one of the abandoned places in France is just 12km from Paris, the capital of France. After building the airport in 1972 near the village, the village was home to the flights in the sky and the loud noise was something the residents hated the most.

Most of the owners left their residencies and chose to live in urban areas. Although there were few villagers left even after the airport was built, a flight crash caused them to leave the Vieux-Pays de Goussainville.

It is said that06 flight crew and 08 local villagers were killed during the incident and the entire Vieux-Pays de Goussainville became a ghost town after that. If you pay a visit to this place, you will be able to find some engaging sights of left homes, gardens, streets, and the crash site even at present.

The church of Saint-Etienne-le Vieux

The nature doesn’t know any value of the assets. Even the religious places or the holy places hold no value to the nature. The best example among the abandoned places in France is the where the nature has taken the lead. When coming to the history of this place, the church is recorded in the papers from 10th century.

After facing a couple of wars from the 15th century and the 20th century especially in the Second World War, this church remains a hidden church for the travelers.

The most important thing about this church is its natures’ features. Not only plants, rocks, or the invaded buildings but the existing ruins will keep you attracted too long. Although the everything are still there, you will find the sky as its roof at present. If you pay a visit to France as a traveler, this church must be in your plans.

If you are an horror film fan, this will have to be a place that remind you of an horror genre. Although it sounds creepy even after the first hearing, this place has filled with enough embracing assets of nature. The main building has been built-in 1899 as A place for the people with mental diseases.

However, tortures, severe mental treatments with electricity, or deaths have not been reported in the beginning. After the completion of successful mental treatment, the place has been handed over an adult medical center in the late 1960s.

After being abandoned in 1997 this place has become a rest place for the travelers who need to stay a alm night along with the quietness at its best. If you intend to stay for a while in this place, you will have a kitchen, dining room, and even bedrooms under ruined conditions.

The Castle Of Lamare

If your intention is to find an abandoned place which is as it was left, the castle of Lamer will be the best match for you. It is a place that has saved lots of sweetest memories as well.

One of the problems the travelers to pay visit to abandoned places in France is the legal clearance. Other than that, the quietness in the countryside, being fee from unpleasant memories, being tidy, and the maintenance of the nature like factors must be ringing some bells for sure. This mansion has been developed into a place where the visitors are accepted in a welcome manner.

Although you don’t want to stay and pay money, you are still free to get what you need. Although the last owner of the place left was in 2010, the furniture and the property dates back to its true origin. You will be able to find your best accommodation provider along with lots of features for a reasonable price in here as well.

You will find the village near Limoges in bucolic Haute-Vienne one of the remote villages in the area without a single soul. This place will be the best abandoned place or one of the most terrifying abandoned places in France to you. Oradour-Sur-Glane was a village located in France and occupied by The Germans in Second world war.

Since then the village was left by the remained villagers and the nature took the control of it. At present, the village has become a site for the travelers who love seeing the ruins of a massacre incident. The stream, the ruins of the bobe church, and the locals from nearby villages will tell their story for you if you pay a visit to this place.

The place is home to a water reservoir which caused people to abandon their homes and everything they had in their possession. After the arrival of the Lac du Salagou, it has decided to create a water reservoir in the Celles village in a higher elevation. The dam was made in the early 1960s and it was planned as a project with two stages. After raising water to a height of 139m, the second plan was supposed to collect water into a height of 150m which never happened.

People was afraid of any leakage which could cause not only the running of the properties but the lives.
Most of the urban travelers pay visits to this amazing village to see the live examples of the disappointments and the frustration of people who had to leave their belongings.

If you find time to pay a visit to this place, you will find enough memories for your future reference. Not only the ruins, but the water reservoir will be a nice place to pay a visit in an evening. Although the establishment of the abandoned villages started back in 2019, there was not a success which has still remained opportunities for travelers.

Is it illegal to enter abandoned places in France?

Why are there so many abandoned places that have ruined?

France is a country where the nobelium has taken place. It means there have been lots of nobleman in France who have taken part in the France state in the earliest time. Along with the time, people have developed themselves without those Noblemen and their properties have remained.

How do I discover abandoned places in France?

Google map is considered to be the best tool to do that. You may simply conduct a search on Google Map and then get results as much as you want.

Why do the abandoned places look creepy in France?

Unlike any place in the world, France has got abandoned mansions that run a long time in the history. The history related with its owners, the nature’s invasion into the buildings, and similar fates have brought fear into the tourists’ minds. There is nothing beyond that at all.